On May 26th, BPC had it's first School Maker Faire. This is a post in progress celebrating this event. If you subscribe and are getting an update, know that this post is still under construction! :)

6A-1 Fish Farming (need to finish & publish)
6A-3 Aquaponics
6A-4 BPC Maker Faire Project: A Energy Effective Home
6A-7 mini greenhouse
6A-8 The Carbon Footprint of Food
6A-10 Gone Fishing

6B-1 If you need water, MAKE it
6B-2 Creating Awareness about Biking
6B-5 Eco-Friendly House In A Hill
6B-6 Our Ocean Wave Of Trash
6B-7 CAUSE and EFFECT
6B-9 Vertical Garden (need to write & publish)
6B-10 Vegan Food 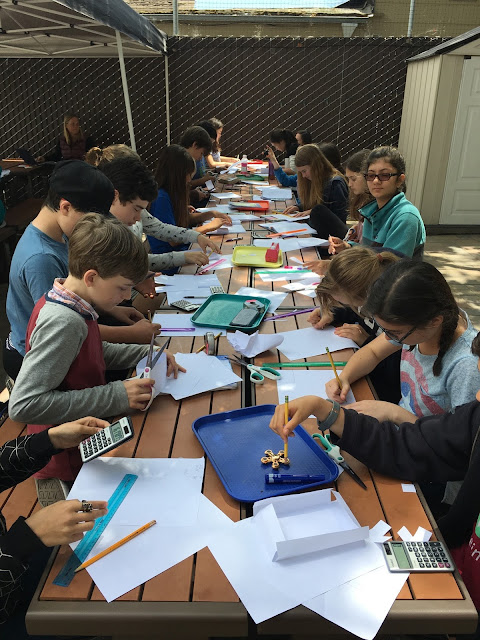 Last Thursday, 7B took their class to the garden for a design challenge. They were given a piece of 8.5 x 11 paper and challenged to construct a rectangular prisms popcorn container with the largest volume. They had access to scissors and tape. Their container was then filled with popcorn.

There were lots of interesting ideas at the beginning:
-"All the volumes will be the same because we all have the same size piece of paper."
-"A taller container will hold more."
-"A container with the largest surface area on the bottom will be the biggest."

They went to work and as the containers were constructed and volumes calculated and recorded, they were able to refine their hypotheses. We will follow up on class this week with further analysis of their findings. 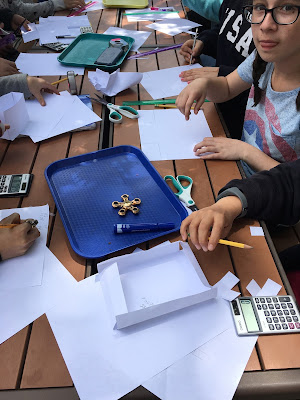 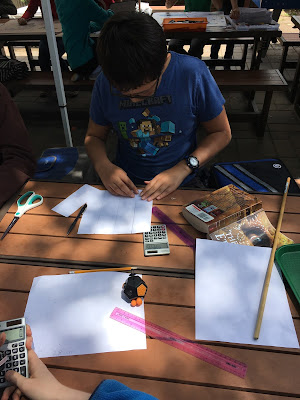 Posted by carwaiseto at 10:19 AM No comments:

As a final project, I like to find a way to incorporate a social justice lesson into the eighth grade curriculum. Last year, the class spent the final weeks of the year tackling the question, "Is minimum wage a livable wage?" They explored by calculating living expenses for a year (rent, food, transportation, entertainment, etc) and then compared it to what you would earn if you were working a minimum wage job. They had a a guest speaker from the Human Resources department come and talk about the taxes and deductions that are taken from a pay check. In the end, we had a good debate/conversation about whether or not you can live off of minimum wage.

This year, the class took on the idea of food deserts. This is a project I have been tossing around for about a year. The essential question was, "What is a food desert? Who is impacted by food deserts?" We researched and defined a food desert. They looked at research about the impact of food deserts. For four classes, a group of students were charged with locating grocery stores on a set of maps from AAA of the Bay Area, Lake Tahoe, and Portland, OR. They had to cut out 1-mile radius circles to represent the reach of the grocery store. The areas that were not covered by the circles are defined as food deserts. These maps are not comprehensive because we were limited in time, but students were able to get a sense of how food deserts occur and who is impacted by these deserts.

Our discussions centered around how they live in an region of the country were access to fresh fruits, vegetables, dairy, and whole grains is easy. They recognized the high density of markets and grocery stores is high in the Bay Area and that affluent areas had great overlap of circles. Some students were able to recognize living in Northern California is not representative of the issue of food deserts. If we had more time and I had planned ahead, we would have done a second round of maps that represent cities where food deserts are a significant issues, such as New Orleans, Atlanta, and Detroit, and compared maps with the Bay Area. I would extended this to look at grocery stores per capita and other ratios that might have helped us understand the issue.

This activity turned out better than I had hopes and I was pleased with how we were able to use math to explore this topic. I look forward to refining and extending this project for future classes.

If you would like to read more about what happened in Ms. Seto's math classes, please check out https://bpcmathseto.blogspot.com/

Posted by carwaiseto at 10:17 AM No comments:


Students are always asking,"When will I ever use this?" in math class. I do my best to give them real world contexts for the skills they are learning. In the 8th grade, we began the year learning about linear functions and figuring out how to graph them. To help make these skills real, the students did an activity where they had to use linear functions to figure out how many rubber bands a Barbie required to get the most thrilling bungee jump off QLab 201's balcony (16 feet).  Thrilling was defined as getting as close to the ground without actually touching the ground.  Here is a compilation of shots from our jump day.

Thank you to Blake Hansen for the video footage and editing.

To see more photos and videos and to read more about the project, see this blog post.

Posted by carwaiseto at 8:08 AM No comments:

Make Way for Fishes (in the Reef Aquarium)

Today was the day so many BPC students were waiting for... fish in the reef tank!  (Although, as a science teacher, this blog post author does think that vertebrates get an unfair share of the love--invertebrates are pretty awesome and important, too!) You can check out the video of the fish release below.

One Coral Beauty Angelfish (Centropyge bispinosa) - These fish are omnivores--they eat algae and are also known to nibble on soft coral.  Like the Cardinalfish above, the Coral Beauty is in the Chordata phylum, Actinopterygii class, Perciformes order, though in a different family.


One Algae Blenny (Salarias fasciatus) - This fish is also in the - you guessed it - Perciformes order and there are 13 species in the genus Salarias.  This Blenny is best known for eating the algae growth from rocks and glass, although they are primarily detrivores--scraping material off hard surfaces such as rocks and coral. Blennies end up eating protists such as filamentous algae, diatoms, foraminiferans as well as tiny crustaceans, detritus, and sand.  This fish can grow up to 5" in an aquarium--that's one big Blenny!


One Orchid Dottyback (Pseudochromis fridmani) - Also in the Perciformes order, these fish are found only in the Red Sea.  Orchid Dottybacks are carnivores, and will even prey on bristleworms!


One Flame Hawkfish (Neocirrhites armatus) - Also in the Perciformes order, Hawkfish belong to the family Cirrhitidae which has 12 recognized genera and 38 species--one of these is the Neocirrhites armatus! Like most hawkfishes, the Flame Hawkfish lacks a swim bladder--instead it spends a lot of its time perched on rocks, or dwelling on the sandy tank bottom. Their lower pectoral fin rays are also thickened, which helps to wedge them places and and hold them in a current (which, in our tank, comes from the powerheads). Perching helps them conserve energy.

Five Banggai Cardinalfish (Pterapogon kauderni) - These fish can most often be found swimming around in a group in our tank. They are named after the Banggai Islands of Indonesia, their natural home. They are in the Chordata phylum, Actinopterygii class, Perciformes order, and are the only organisms in their genus Pterapogon!  A fun fact: the Banggai cardinalfish is a paternal mouthbrooder--which means the male carries the eggs in his mouth while they incubate!  Read more about it on this Creature Feature at the Seattle Aquarium or watch this video to see mouthbrooding in action. Or this video, hilariously entitled "Banggai Cardinalfish With Big Babies In Mouth"! 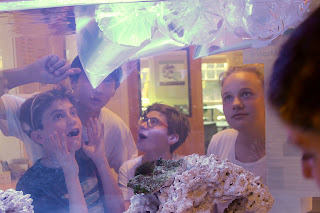 BPC Improv Club mugging for the cameras
as the fish float in their bags, awaiting release!

Want to read more about our BPC reef tank?  Check out the blog label Tank News for more posts!
Posted by C. Mytko at 8:54 PM No comments:

The Invertebrates Have Arrived in BPC's New Reef Aquarium

As many of you know, BPC has a new aquarium in the first floor lobby of the Athena building. Erin Janoff, aquarist and owner of The Octopus's Garden, is facilitating its development into a vibrant reef tank! This is no ordinary fish tank. Wikipedia describes a reef aquarium as "a marine aquarium that prominently displays live corals and other marine invertebrates as well as fish that play a role in maintaining the tropical coral reef environment. A reef aquarium requires appropriately intense lighting, turbulent water movement, and more stable water chemistry than fish-only marine aquaria." Erin has spent the last few weeks assembling the machines and prepping the watery environment.

On September 12th, the first animal was added - a pioneering hermit crab. (You can watch the video of Mr. Nelligan adding this pioneering invertebrate by clicking the video below or accessing this link.)


On Friday, September 16th, more invertebrates were added. Most of these invertebrates will help keep the tank clean. They are listed here along with their taxonomic classification. (See bottom of this post for the Tree of Life BPC 7th graders are currently using in their study of life sciences!)

Last Tuesday, Erin added two living rocks, two powerheads (flow pumps), and lights to our tank.  The powerheads are held to the glass by powerful magnets.

The "living rocks" are full of algae and green zoanthids. Zoanthids are in the phylum Cnidaria. (There are at least seven families, 16 genera, and many, many species.) Zoanthids feed both by photosynthesis (helped by the zooxanthellae they have inside them) and by capturing plankton and floating matter.  (Another fun fact: zoanthids produce a substance called palytoxin, considered to be one of the most toxic non-protein substances known.) "Algae" is an informal term used to describe a large group of photosynthetic organisms which are not necessarily closely related. Erin added a bunch of macroalgae to our reef tank--the snails tend to eat the "2D algae" on the sides of the tank, while fish and crabs eat this "3D algae" on the rocks. And I have no doubt those rocks are also full of many microbes such as bacteria!

The powerheads provide a turbulent water environment for these sessile (or non-mobile) organisms.  Because some animals are attached to the rock, their food must come to them. They passively wait for food to pass by and touch their tentacles--then they discharge their nematocysts (basically tiny, poisonous harpoons) to capture their prey and draw it toward their mouths.  (Check out this cool video of sea jelly nematocyts firing!) The fans are also necessary to blow the animals' waste away from them. (Fun fact: these simple animals have one opening--food goes in and waste goes out of the same hole!)

The LED lights are on timers and give a rhythm to the reef creature's day.  Since many of the organisms are photosynthetic autotrophs, they need the light to make their own food.  And the creatures need the darkness to know when to sleep! 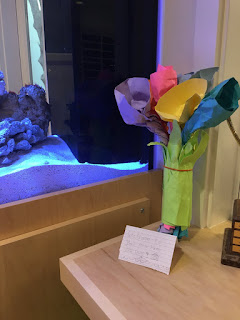 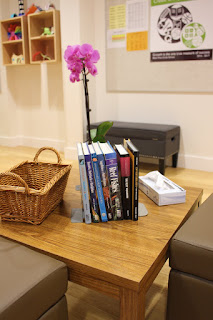 We've even started a little reef library in the lobby (pictured left), and some students made welcome paper flowers for the crabs (pictured right).

Today, BPC 7th graders had the opportunity to learn Tapigami with Danny Scheible in the art studio.  Danny created his art form while studying contemporary and fine art at the University of California, Santa Cruz. Now he travels the world teaching Tapigami and making work on commission for museums, galleries, private collections and, of course, the san Mateo Maker Faire!  You can see more of his work on his Instagram.


At its core, Tapigami is the art of applying imagination to rolls of tape. Any kind of tape – but mostly masking tape. (website) 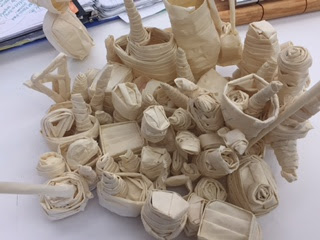 The BPC community is invited to learn, too!  Come join us at the upcoming Art Exhibit where 7th graders will have a booth were they will teach others the art of Tapigami! 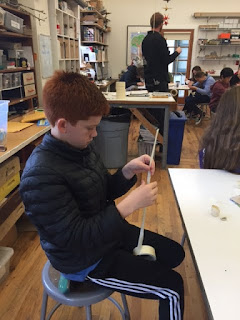 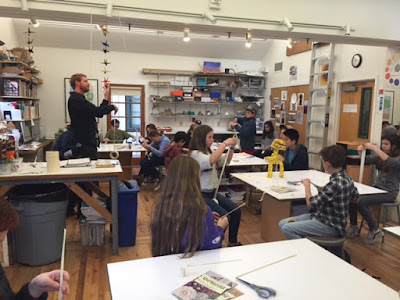 BPC STEAM in the News